The universal and legitimate notion of the right to mobility (and circulation) is today called into question, whereas paradoxically mobility is valued by liberalism and modernity. Tangible and immaterial goods circulate freely while obstacles, barriers, walls are increasing and they are barriers to the movement of individuals. The border, depending on whether it is open or closed, is increasingly secure and generates clandestine exchanges and risk taking that are increasingly important despite the obstacles, but in no way annihilates or reduces migration.

It contributes to generating two distinct groups of people, depending on their economic status and geographical location. There is discrimination, with people from “developed-dominant” countries benefiting from the right to unrestricted mobility. For some people, movement is a right and a necessity, but it is not granted to them. Many populations are forced to apply for visas, are denied the right to move and are therefore condemned to clandestine mobility. 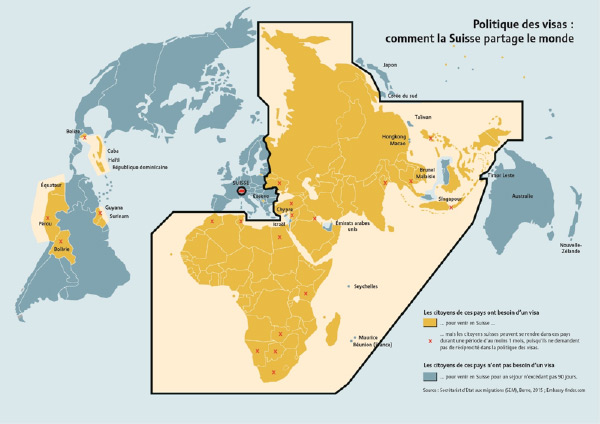 The visa policy of developed countries illustrates this division of the world as shown in the map above. Switzerland allows citizens of the so-called Northern countries and some South American countries to come to the country without a visa. Conversely, citizens of African and Asian countries have to undergo administrative formalities. Swiss citizens, on the other hand, can travel to some of these countries without a visa. The ability of citizens to travel depends in part on their country of origin.

The refusal or denial of the right of movement, as implemented by sovereign states and the EU to limit the movement of migrants, does not dry up flows or routes. This tends to show that the dissuasive effect of restrictive migration policies remains limited. This only shifts the routes, changes the time of migration, redirects migration (reception, etc.) and creates new spaces around borders (transit camps, hotspots, detention centres, etc.) involving new flows (escorting people back to the borders, etc.) without the possibility of return once the border has been crossed.
(Frontex, hindrance to mobility – Schengen area, free movement in danger)