A clash of two worlds

The wave of migration to Europe between 2014 and 2017 received a lot of attention. In most cases, posts were illustrated with photographs or graphs aimed at illustrating the extent of migration flows to Europe.

But this is a very different approach. This image captured the world press in October 2014. This is Club Campo de Golf in Melilla, a Spanish enclave in Morocco (like Ceuta).
Just against the golf course and the club, paid for entirely with European grants from the Regional Development Fund (EUR 2 million) aimed at “strengthening economic and social cohesion”, lies the Moroccan border.
Three six-metre-high fences must prevent refugees from Africa from entering Europe.

The photo shows golfers playing on the green as migrants tried to jump over the fence to enter the city. The two people playing golf were about 150-200 yards away from the fence. The boundary of the golf course is the barrier. The migrants were brutally removed by the Spanish border guards (see video: https://vimeo.com/109091397). 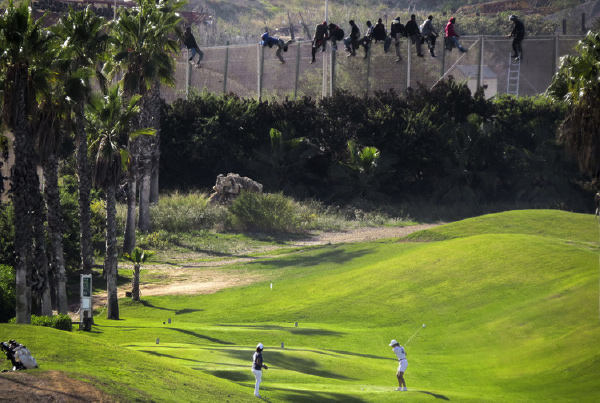 This image immediately raises a lot of questions, forcing you to think:
Where is this? Who do you see in the picture? What’s going on in the picture? Why is this happening? How is the reaction of the people in the foreground? How would the people on the closing look at the scene in front of them? Why are they taking this risky attempt, for what purpose?

Put yourself in place from both sides:
How would you as a migrant react to this situation? Why are you undergoing this attempt – even though you know (see video) that the chance of success is almost nil? Why did you leave your country at all?
As a resident in this border region (in this case the golfer) how would you react to this situation? Do you understand their lack of reaction? This points to an indifference to a situation that has often arisen, or does not concern certain inhabitants of the city of the inequalities between North and South and the suffering of these migrants.

How do you feel about the European position? Is the investment that happened for the golf course justifiable or is it even more obvious to the migrants on the other side of the border?