The aim of this vignette is to deconstruct the idea that Europe is being overwhelmed by migratory waves. While the European Union experienced a major migration crisis in 2015 with many millions of migrants, migration flows have decreased considerably since then. There were 2.4 million migrants from non-European countries in 2017 (Eurostat figure, 2018). However, the European Union appears in the media as besieged, threatened and weakened by massive flows from the countries of the South. This idea is also conveyed in some textbooks when they claim that South/North flows are predominant in the world. This map is a good illustration of this representation of migratory phenomena in Europe. 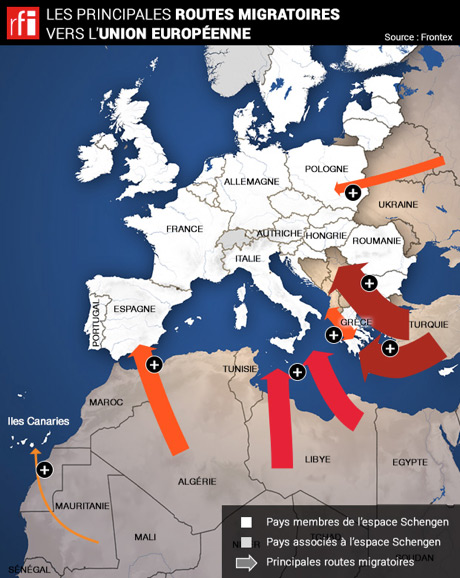 First of all, this map is centred on Europe, making it impossible to compare with flows in other neighbouring regions, particularly in Africa and the Middle East. Furthermore, the data represented are absolute and not relative values, which does not allow us to contextualize the phenomenon. The flows are represented by thick red or orange arrows, which tends to support the idea of massive flows that constitute a danger. Finally, other types of flows are omitted: the map does not represent intra-European migration, European emigration or even migration between non-European countries.

Representing migration is central to understanding it and identifying its dynamics. A smaller scale map showing Africa and the Middle East more broadly would make it possible to show neighbourhood migration in countries of the South and the complexity of flows that are not simply South/North movements. This type of map would help to put the volume of migratory flows to the European Union into perspective and would call into question the image of an assaulted Europe.

Moreover, approaching migration solely through flows disembodies the phenomenon and does not allow us to consider the question of migratory routes. Indeed, migration is not a linear process: migrants stop in certain countries, settle temporarily and then leave again according to the opportunities and difficulties encountered. Knowledge networks also play an essential role in this process.