The Chinese restaurant of Jo Kraaijeveld and her husband Yuen Wah at Katendrecht. The photo was taken in the 1930s. 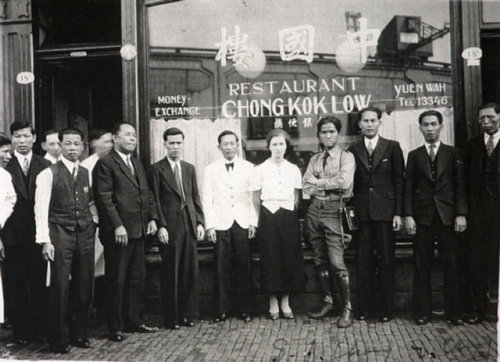 Before World War II, the largest Chinese community in Europe lived on Katendrecht, the peninsula, popularly known as De Kaap (The Cape) in the port of Rotterdam. The Cape was the first Chinatown in Europe.

Jo Kraaijeveld experienced the rise and fall of Chinatown. With her late husband Yuen Wah, she ran a Chinese restaurant on Katendrecht.

“The Chinese were never discriminated at Katendrecht. The Chinese call me Jo Kuw, Aunt Jo. When I walk down the street in Amsterdam, the Chinese come to me. Hey Jo, is that you? I was in a flower shop in Hong Kong, even there I was recognized by a Chinese who had lived in the Netherlands. The Chinese call a Dutchman Hollan kwai, a ghost. I always say that I am a Hollan yang, a human, or a lo feng, a European. We are not a kwai, that is a swear word. I often say that to Chinese children, to educate them a little.”

John Tsang was born on Katendrecht and still lives there.
“At school they name called me and my brother ‘pindapoepchinees’ (peanut poop chinese). But actually the Chinese were hardly discriminated in Katendrecht. I have never been ashamed of my origin. I went to secondary school in Kralingen, where they really looked down on you when you came from Katendrecht. Kralingen was the bad neighborhood. People still react strange when you say you live on Katendrecht”.

The peninsula Katendrecht (The Cape) in Rotterdam today 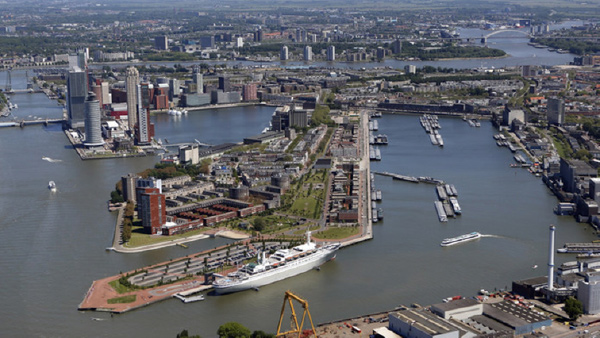 The purpose of this vignette is to explore the concept of ‘feeling at home’, as it can be related to the current debate on migrants in European countries and their participation in society. In geography textbooks much attention is given to the reasons for migration, types of migration and the spatial distribution of migrants in countries and cities. Students learn concepts that help them to describe and explain migration patterns at different scales. As immigrants settle in new places, they are faced with endless uncertainties that prevent them from feeling that they belong. From language barriers, to different social norms, to legal regulations separating them from established residents. Little attention is paid to the extent to which migrants feel connected to their new homeland, their city or neighbourhood. Do they feel at home? Why or why not? When attention is paid to feeling at home, it is usually in terms of integration and assimilation. However, feelings of ‘home’ and ‘belonging’ are much more complex and multidimensional than a simple continuum between unintegrated and fully assimilated.

Easthope (2010) states that the concept of ‘home’ cannot be clearly described. It can be defined as a place where the everyday routine takes place, a place where you feel safe. But ‘home’ is also the basis for your identity. Ghorashi (2004) has taken ‘home’ as a starting point to gain understanding into migrant people’s identity and their connectedness to society. ‘Home’ in the context of migrants can be interpreted in two ways. First, there is a national approach. ‘Home’ then coincides with the geographical boundary of a migrant’s country of origin. From this point of view culture, identity, country of origin and feeling at home coincide. ‘Home’ is where the migrant comes from. However, the transnational approach states that the feeling of home is not so well connected to a territorial space, but to the space in which people can shape their lives as they wish to. The sense of belonging(s) goes beyond the national border of the home country. For these people, the connection between their national identity and the country of origin is one of the many possible connections, but certainly not the only one. So, home is not so much where you come from, but where you feel at home. This could be even be a variety of places in more than one country.

This is also reflected in the vision of Taiye Selasi (2014). She states that the question “Where are you from?” usually puts you in the box of a country, often the country on your passport, or even the country of origin of your parents, whether you come from China, the Netherlands, Morocco, Germany, Pakistan or the United States. For a lot of people, that doesn’t say much about who they are. Is it clear that if you are introduced as a Dutchman or Turk, what kind of person are you? Selasi argues that for many people, we might be more of a ‘local’ than a ‘national’. And that the places (cities, neighbourhoods) we lived in, contribute to our identity. Selasi raises the questions: where are you a local? Where is your home?
To answer these questions Selasi identifies three characteristics (3 R’s) of being ‘at home’ or ‘local’.

The peninsula Katendrecht (The Cape) in Rotterdam today